We hear it all the time, and some of us actually do it. Some of us do it to the extreme. And you know what? I’m okay with that.

Here’s my process. It’s built around a Mac ecosystem, but the ideas are applicable to others, with different applications filling the roles. It might seem extreme, or paranoid. We’ll revisit that when you eventually lose some precious photos of your kids or that document you just worked 23 hours to perfect. 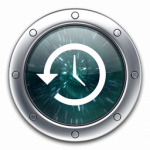 For Macs, using Time Machine is a no-brainer. You plug in a bare drive and it’s hard not to use it for backup. Time Machine copies everything from your internal drive to your Time Machine drive. Once an hour it copies all the latest changes. It’s simple and you don’t have to mess with it, a hallmark of any backup solution. If you have to restore your computer at some point, the Mac OS install process can copy your files from the Time Machine disk so that you shouldn’t lose more than an hour’s worth of work. Further, you can use Time Machine to pull off previous versions of any file; the version from an hour ago, a week ago, a month ago, etc. Very handy at times.

That’s pretty good, but the Paranoid Backup-er takes it further. You can’t boot from a Time Machine backup. So if your internal drive crashes and burns you have to go through a lengthy install process to get everything back to normal from your Time Machine drive. I personally want the ability to take my backup drive, plug it in, and keep going with as little downtime as possible. This is called “booting from a clone”. To get this ability I run a scheduled nightly backup (to a drive separate from my Time Machine drive) using SuperDuper. Every night an exact copy of my drive is made. It only takes a few minutes because only the things that changed that day have to be updated on the backup drive. Now if my internal drive fails I can simply boot off the SuperDuper backup and I’m back in business. If I have things set up so the SuperDuper backup is the same physical size as my internal drive, in many cases I can simply install the SuperDuper drive into my computer and I’m done (other than using Time Machine or Dropbox to get back the day’s work missing from the last nightly SuperDuper backup).

So what about immediate changes? SuperDuper only backs up once a day. Time Machine only backs up once an hour. Can we do better than that? Yes, and for this purpose I use Dropbox. Dropbox is designed for syncing files between computers. It syncs changes nearly immediately and does a pretty good job of it. And the best part is that they’ll give you at least a 2GB allowance for file syncing for free. (There are various ways to increase the free storage—mine has been bumped up to 7GB.) For my purposes I only use Dropbox for my non-media documents. So any document that’s not a picture, video, or music file is handled by Dropbox. Perhaps surprisingly, the total storage needed for these files is not very much and easily fits in the 2GB free allocation. If I create a spreadsheet, for example, I do it in a folder synced by Dropbox and the file ends up on all my other computers and on Dropbox’s servers (accessible via any Internet browser), with the most recent changes available everywhere nearly immediately. It’s terrific, especially if the free version covers your needs.

Okay, so at this point I have everything backed up to at least 2 places. But what I don’t have is anything (outside of Dropbox) backed up anywhere outside of my house. A fire or theft would be devastating, or perhaps a particularly nasty computer virus that wipes out all attached drives. I can’t bear the thought of losing my precious, irreplaceable photos or videos. Thankfully, this is a pretty easy thing to manage if you’re using something like SuperDuper. Once a week I take my SuperDuper drives to work and swap them out for their clones that I store there. To make this process as easy as possible I make the drives true clones by setting their system drive IDs to identical values. Now with the worst case scenario I’ve lost no more than a week of material, and probably much less than that due to Dropbox.

Now for the truly paranoid who have sufficient bandwidth on their Internet connection, there’s one more step that can be taken: Internet backup. For some this may not be a viable solution, but you’re probably just fine with all the stuff I already talked about. I’ve found that for Internet backup, Crashplan works well, at a decent price. It has two features that I love: unlimited backup and backup of external drives. It takes a while for the initial upload — like weeks or even months — even with a fast Internet connection. (They have an option to send you a hard drive to skip the massive initial upload over the Internet, but it’s kind of a pricy option.) Once you’ve got your initial backup set done, you probably won’t notice Crashplan working in the background after that. I use it almost exclusively for media — videos, photos, and music — with a sprinkling of a few other things here or there. A restore off the internet could take a while. That’s not really the point. For me, this is the last ditch option if everything else goes to hell. I expect I’ll never pull a file back down, but I take comfort in knowing it’s there. Paranoia can use all the comfort it can get.

I suspect there’s still a question you’re asking. It’s probably, “Jeepers, Steve, have you ever actually lost any data?” No, I haven’t, but that’s not the question I was hoping for. Instead I was thinking you might ask, “Jeepers, Steve, doesn’t this take a boatload of drives?” Well, yes. But drives are (relatively) cheap and my paranoia about losing something is great.

In our house I have one computer, a Mac Mini, that is always running and acts as the house server. Hooked to it is one big drive that supports Time Machine for two household computers. Each of the computers also individually has a drive hooked up similar in size to the internal boot drive, which is used for SuperDuper. So if you’re keeping count, that’s n + 1 drives, where n is the number of computers. Except since I keep offsite SuperDuper clones, it’s actually 2n + 1.

Further, we have one very large drive that we use primarily for media. As of now, I have no problem keeping all our movies, music, and photographs on one big drive. This is true even though I’ve started ripping some of our DVDs and Blu-Ray discs. Since this drive is used as an archive, I don’t feel the need to use Time Machine with it for versioning and hourly backups. I use SuperDuper to clone it nightly, plus that content is primarily what gets backed up by Crashplan. So now we’re at 2n + 1 + 2 backup drives, which in our case equals 7 backup drives.

7 drives, just for backup. Seem excessive? I don’t think so. I feel very, very secure about not losing data. I will never have to look my wife in the eye after her hard drive crashes and say, “I’m sorry,I think it’s all gone.” That peace of mind is well worth it.

So, 7 drives, but 3 are always rotated weekly into offsite storage in a drawer where I work. That leave 3 drives hooked to the Mac Mini and 1 drive hooked to my wife’s computer. I don’t think that’s so bad. Another nice aspect of this is that USB drives are plenty fast enough for this purpose. SuperDuper does all its work at night, so a USB connection works fine. The Time Machine drive might benefit from something faster, but frankly I’ve never had a problem with it over USB. Someday maybe Apple will support USB3 and that will really solve the problem of fast connections to cheap storage.

I recently thought long and hard about some kind of fault-tolerant multi-drive system like a Drobo. I came to the conclusion that it was costly, overkill, and hard to back up. It’s overkill because I already have an extremely fault tolerant system with everything I’ve outlined above. If any drive dies, I have multiple places where that data has been replicated. And I say a Drobo would be hard to back up, while others would say it doesn’t need backing up because it’s fault tolerant. Fault tolerant doesn’t help if your house burns down, or a virus wipes out your system. I still couldn’t sleep unless I had a clone of that data somewhere, and it would have to be offsite for real security. Now I would be looking at buying 2 or 3 Drobos plus the drives to put in them, and that cost is a tremendous jump over basic big drives. My conclusion is that a Drobo-like system is pointless for backup. (There are other reasons you might want a Drobo, but I’m not going to get into that here. I don’t think basic backup or archive storage is a good reason.) Even if my media storage needs grew to the point where a single big drive couldn’t handle it, I’d still just get another set of big drives and split things between them. Even so, it would be cheaper and safer than a Drobo-like system.

I use a basic external drive for Time Machine. I like the Seagate GoFlex Drives because the interface can be changed (for a price) to support USB3, FireWire, or even Thunderbolt. For my SuperDuper drives I’ve been very happy using a drive dock: 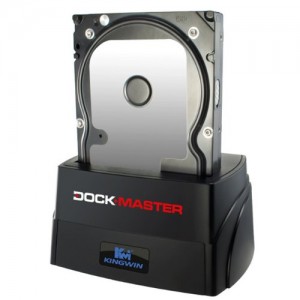 I buy cheap, bare drives with no enclosure and simply slip them into the dock. Once a week when I swap them with the offsite drive I pop out the current and pop in the replacement. Very fast, very easy. Anything encouraging ease of use for backups is worthwhile. I transport the offsite drives in drive cases like this one: 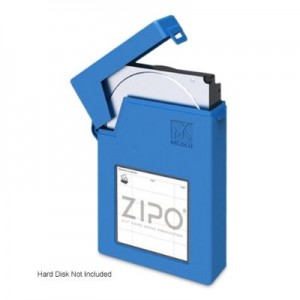 This may all seem excessive, but I don’t think it is. Losing data is a big deal. Maintaining thorough backups once the backup sytem is in place is also extremely easy. That’s important for anyone to ensure backups continue, but especially for someone like me who has precious little time to mess with anything. (This blog post, for example, was written in many 10-minute snatches today while dealing with kids and other family needs.) When — not if — a drive fails, I want to deal with it as efficiently as possible and keep everyone happy. This system I have in place allows that and virtually guarantees I will never lose data. I win.