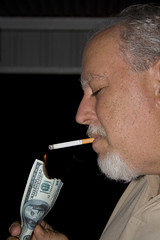 “People who don’t have money don’t understand the stress,” said Alan Dlugash, a partner at accounting firm Marks Paneth & Shron LLP in New York who specializes in financial planning for the wealthy. “Could you imagine what it’s like to say I got three kids in private school, I have to think about pulling them out? How do you do that?”

Scheiner said he spends about $500 a month to park one of his two Audis in a garage and at least $7,500 a year each for memberships at the Trump National Golf Club in Westchester and a gun club in upstate New York. A labradoodle named Zelda and a rescued bichon frise, Duke, cost $17,000 a year, including food, health care, boarding and a daily dog-walker who charges $17 each per outing, he said.