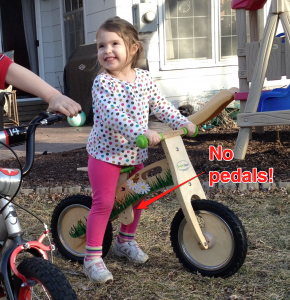 I got a few questions about the bike that my daughter is riding in this picture. It’s generally called a “push bike” or a “balance bike”. The concept behind it is explained pretty well in an article by Josefine Köhn-Haskins, Push Bikes and Balance Bikes for Children. And there’s other good information by Bonnie Rochman in Bye-Bye, Training Wheels. Hello, Balance Bikes.

Starting a child on a balance bike makes it easy for him to learn riding a pedal bike. Most kids will be ready by the age of five or even four.

We’ll see how it goes. Neil has started learning using training wheels and it’s taking him a while. But we might have started him a year too early also. I took his training wheels off last Saturday.

Children can start using a balance bike as early as age two. But do not expect them to sit on the bike and just race off.

Um, no. We have a little daredevil girl.

These bikes can really speed up, especially downhill. And most youngsters discover the fun of rolling downhill with their feet up pretty fast.

For Gillian that took all of 2 minutes. She fell off her push bike several times, which is not the usual course of action for these things. But she always got back on. To go back to the top of the hill again.