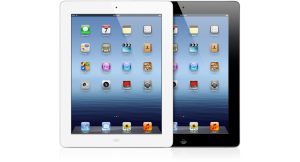 I bought the first iPad the day it came out, but I never moved up to an iPad 2. Now that the iPad has been updated yet again, the time has come for me to upgrade. Outside of work, it’s the computing device that gets far more use than any other. (Well, maybe outside of my iPhone.)

On my first iPad I did not get 3G, I just went with wifi. Generally this wasn’t a problem, but there were occasionally times when I was out and wanted to connect to a data network. Eventually my iPhone gained the ability to act as a hotspot (how gracious of AT&T), so I turned that on as an experiment. I did end up using it occasionally, but there was a barrier to entry (even though slight) to getting things hooked up, so I didn’t use it too often. There was one trip I took out of town where it did get heavy use. Recently I turned off hotspot on my iPhone to save $20 a month, and made the decision that my next iPad would have cell data built in.

Now that iPad is here. I went to order it yesterday and found this chart detailing the available data plans:

This iPad now has the ability to act as a hotspot, but there was no information about costs or availability on these networks which worried me a little. We’re about to go on a little family vacation, and it would be handy if I could use my iPad as a tether point for the rest of the family. I couldn’t find any information at that time about it, so I based my choice on the fact that AT&T offered a $15 option. When I do want to use cell data on my iPad I don’t think I’ll use much, so the cheapest option will probably nearly always work. Although 250MB is really not that much, so I was a little worried about it. Still, it was the best choice available, half the price of the next option up of $30. I sent in my order.

I should point out that I don’t really care about 4G. I’m not going to be streaming movies over a cellular network. I will simply be connecting for email, twitter, blog posting, etc. I know from past experience with my phone that you can do a lot of things like this without running up the data total too fast. Many people seem to think that having 4G will mean a huge increase in the data that’s used, but I don’t see a data speed increase really having any effect on the data amount consumed for the way I use an iPad.

Now today I still had a little buzz in the back of my head that I maybe made a mistake going with AT&T. Indeed, today I checked and the little chart had been updated:

But wait, it gets better. Today we have more news about tethering. Apparently AT&T is waffling on offering it. Verizon however, says that you can tether at will using their standard data plans. That’s perfect.

Since Apple is still surprisingly showing no delays on ship dates, I canceled my previous order and placed a new one for an iPad that runs on Verizon. It was very easy and now I feel much better about my choice. In addition to the things I discussed above, there’s also the benefit that most likely anywhere I might be will be covered by either AT&T on my iPhone or Verizon on my iPad. I’ll never have to be without Twitter again!

The reality is that I may very rarely enable cell data on my iPad. I’m not really sure. I’ve tried to imagine how my usage might change, but it’s just not clear at this point. Maybe I’ll use it twice a year, maybe I’ll end up paying for it each month. Whatever the case, at least there’s no contract and I can always choose a relatively low-cost connection if that’s all I need.