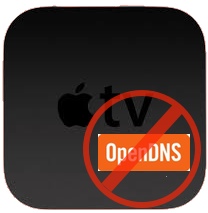 The Apple TV is a great device for streaming TV and movies, particularly if you live in the world of an Apple ecosystem. OpenDNS is a great service for serving up fast DNS records. Unfortunately, they don’t get along.

If you don’t have both of these items, or you don’t even know what they are, this post is not for you. This post is for those who are having problems with the pairing and are lucky enough to be sent here by a search engine.

When OpenDNS and Apple TV are used together, sometimes starting a show on the Apple TV takes forever. Not quite literally forever, but so many hours that you give up and never watch your show. Have you had your Apple TV tell you your movie will be ready to watch in 6 hours? Do you use OpenDNS severs on your router? I can tell you how to fix it.

Not everyone seems to have this problem. It can also be sporadic. My Apple TV was slow when I first got it but then starting working well. I thought something got updated on the Apple TV or in the pipeline to fix it. It hummed along fine for a several months.

Then the slowness came back and it was horrible and it wouldn’t go away. I was extremely frustrated. It took some thinking and some digging and some experimenting, but I did conclusively confirm that OpenDNS was causing the problem. The technical details are unimportant. You’ve probably already read them somewhere else if you ended up here. Something about CDNs and being directed to one close enough and that not happening and causing major delays in your streams. What matters is that turning off OpenDNS and using your ISP’s DNS servers fixes the Apple TV.

But that sucks. OpenDNS is great. It speeds up your Internet access. It can block undesirable sites from your entire network. I didn’t want to turn it off just to make my Apple TV work.

Then the solution hit me one day. It’s simple, but I never once saw this solution in any of the numerous sites I visited and read for hours while trying to get these things to play nicely together.

Here’s what you do:

Your Apple TV will now use its own DNS server and ignore the one specified on your router.

Praise the Apple engineer who decided it was good to let you do this. I can find no apparent way to manually set the DNS server on my Roku box, so it usually sucks at streaming shows. My Apple TV? Not a single problem since I did this. And the rest of my network still goes through OpenDNS.

I hope this simple (and obvious) solution helps others who run into this problem.