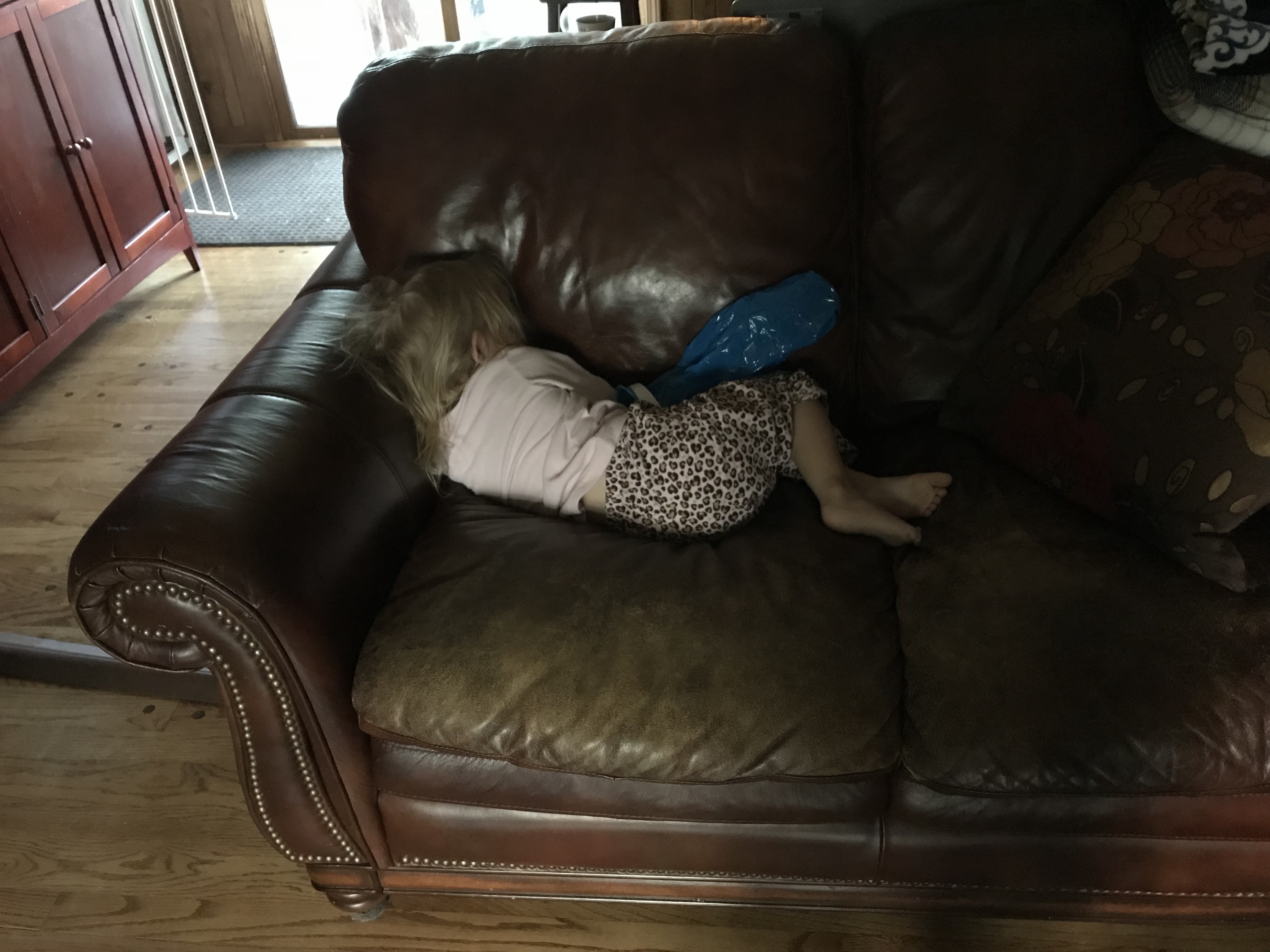 That’s a picture of Paige that pretty much summarizes this week for us.

Terry had her trip to the hospital Monday night around midnight with a sudden onset of major pain. After a couple of hours of waiting for a scan of her insides, we finally were told that she has a 3 mm kidney stone. That little stone is such a booger! Pain off the scale, like giving birth. Two narcotics didn’t touch the pain, and finally a drug specific to kidney stones got things somewhat under control, plus the stone finally moved past the narrowest passage.

I left Neil at home where he kept in touch on his iPad, but I had no choice but to take the three girls. I had to wake them up and we didn’t get home until 3:00am or 3:30am. They did pretty welll. They got to see Mom in so much pain she couldn’t talk and it made her throw up. Kind of like this: 😳😳😳 Thankfully, Dad was there to stay calm and tell them all about things that were going on, and they seemed to get through it mentally unscathed.

Terry came home exhausted but otherwise not in too bad of shape. A couple of the girls had developed some sniffles a few days earlier that turned out to be low-grade colds, and that’s what Terry initially thought she had. That diagnosis was a bit off! Actually, she probably did have that cold, but when the stone showed up it pushed that cold right out the door.

Soldiering on, Terry wasn’t ever sure if she passed the stone or not. She felt okay, just a little off. But then Saturday morning rolled around and things seemed more than a little off. Not wanting to mess around, this time I managed to dump the girls with a friend and I took Terry to the ER without any tagalongs. Another few hours and we are told that the stone is now sitting in her bladder. All told, that was probably the best diagnosis. No infection, no other problem, just the stone hanging out.

We picked up the girls and came home, where Terry had a yucky day yesterday sitting around with low-grade pain, hoping with each urination that she’d find a little speck in the filter they gave her to pee through.

Oh, hey, did I mention that on Monday night her scan also turned up a teratoma on her ovary? Well, it did! A good size one. 5 cm or so. Nearly always these things turn out to be benign, so that’s the good part. The bad part is that nearly always they have to come out. The surgery is usually laparoscopically done, but it’s still not a minor thing. Lots of research on Terry’s part shows that they will almost certainly take the ovary also, and the recovery period can be long and painful. It’s not always too bad, but more often than not it’s no walk in the park.

So while waiting very uncomfortably for the stone to pass, she has that on her mind as something to look forward to soon. She’s going to start down that path with seeing doctors next week.

In the meantime, yesterday I seem to have finally picked up the cold. Thankfully it is pretty low-grade so it’s not really knocking me out or anything. I woke up this morning not feeling so great, but as the morning progresses I am starting to feel better. No big deal that, just a little thorn in the side.

Probably I’m a little more tired this morning since I didn’t go to bed until 3am or so. That’s because I was tracking Calvin and his broken pelvis. Yup. He went hiking with some friends and apparently misjudged a descent off a bridge, landing badly. He couldn’t stand on one leg, so they carried him to the car and he asked to be dropped at the ER because he was worried about being stuck in his apartment unable to move.

From what I can gather after lots of messaging back and forth:

So all told, that outcome is looking about as good as could be expected. I hope to find out more today about what’s going to happen over the next few weeks. It would be really terrific if the impact on school was fairly minimal. I know Diana will do her best to keep it that way.

This morning Paige woke up very early and sat crying on the steps. Not sure what that was about. It happens. She’s now passed out on the couch with her blue puke bag. Maybe this morning she’ll sleep it off and wake up in an hour or so feeling peachy. Or maybe she’ll work on depleting our blue bag supply. No telling yet.

Overall as I sit here in the quiet morning, with Paige passed out on the couch, Lucky passed out in the chair, Terry upstairs cleaning up and maybe peeing for the 4,000th time, other kids still asleep — I’m betting this is maybe going to be a pretty laid back Sunday. I plan for Monday to be the start of moving back uphill for all of us. Do you hear what I’m saying, Monday?!